How do we show that we really are a caring, sharing school?

Raising money for charity is something that we do really well! Sometimes we have a whole school focus such as Christian Aid or Comic Relief, other times, groups of children organise their own fundraising events in school.

Once again, we are delighted to have raised a substantial amount of money for our nominated charity, Christian Aid. This year, we adopted the theme of ‘building hope.’ As such, the children were sponsored to buy bricks to paste onto a huge cardboard structure. A total of 1054 bricks were purchased, meaning that we were able to donate £1054.00 (+£143 in tax relief) to Christian Aid this year.

In assembly, the children were introduced to Zaza and Jephthe who lost their homes in Haiti due to hurricanes and earthquakes. As global citizens, it helped our children to develop their responsibility to help our global neighbours and they know that the money we raised, will be going to help other families in Haiti rebuild new homes.

Thank you for your generous donations. 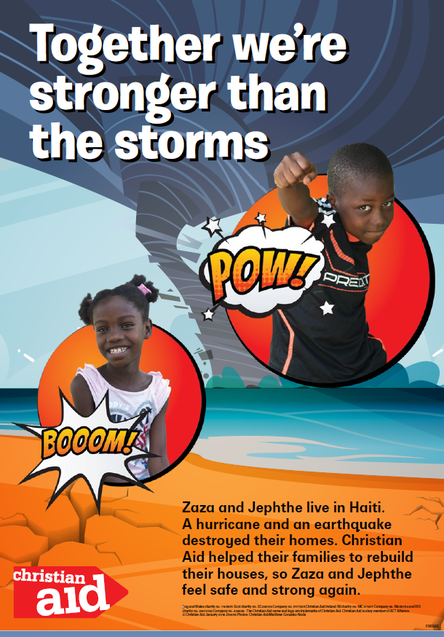 This year Christian Aid celebrated its 60th Birthday. Christian Aid week took place on Monday 15th May through to Saturday 20th May 2017.

The money raised this year by Christian Aid will be used to help and support refugees and families who have fled their home countries due to war, poverty and to give their family a better life.

To help show our support for this amazing charity, we collected donations in the Christian Aid envelopes we received from St Marys Church.

The very talented Miss Tait created a house which acted as a post-box for the children to post their envelopes into.

As a school we took part in a Sponsored Walk around Mary Stevens Park which was organised by Mrs Seker.

Do you remember the target of £1000 that we set ourselves to raise during Christian Aid week? Well, we surpassed it not only twice but nearly thrice! A MASSIVE £2,915.44 was collected by the children, staff, friends and families of Oldswinford Primary School: a record amount!

This year, we went the extra mile in support of Christian Aid. Our fundraising efforts were not only reported in the Stourbridge News, but also recognised by Margot James, MP for Stourbridge, who wrote to congratulate us. However nice it is to have this recognition, what pleases us the most is knowing that we have been able to help our global neighbours and help to improve the lives of those who are suffering and in need. Thank you to everyone for you donations that helped to make our Christian Aid week such a success.

We all enjoyed coming to school dressed in sportswear, in support of this year's Sport Relief on Friday 18th March. From football kits to jodhpurs, tutus to rugby shirts, we all certainly looked the part as we took part in an array of sporting activities set up and organised by Year 6. Mrs Birchall was set the challenge of 5000 steps which she achieved by the end of the day, along with a healthy glow! It's good to know that our donation will make a difference to the education and health of children and adults here in the UK and across the world. We are just totting up the coins and will let you know the final amount ASAP. Thank you to everyone who supported this worthy cause.

All the children have bought home their envelopes for Christian Aid week. We are making cow money boxes to collect the donations when they come in to school. Why cows? Because this year's theme is 'Moooove over Poverty.' In assembly we learned about the difference a cow can make to people in Ethiopia and watched Adi's video (Click the cow to view it!) Each cow costs £150. I wonder how many cows we can fund?

We were keen to do our bit to help the people of Nepal after hearing about the devastation of the earthquake. We read the news story in assembly and suggested our ideas for ways of quickly raising some money. A boy in Year 1 came up with the great idea of "giving change to make a change." So, on Friday 1st May we all bought in our loose change which, when counted up, totalled £396 which we sent to the Christian Aid earthquake appeal, along with our prayers for all of those affected.

In the two weeks leading up to March 13th, we sold 360 red noses in school, raising a fantastic £360 for Comic Relief. Which one did you pick?!​ Click the noses below to see how our donations will be used to help charities both at home and abroad.

We had lots of fun on March 5th bringing an array of book characters to life when we all dressed up for World Book Day. Dorothy, The Boy in the Dress, The Tiger who Came to Tea, ​Harry Potter and Cinderella were just a few of the visitors we had in school that day! By paying £1 to dress up, we raised the grand total of £414 which we donated to Book Aid. In assembly we learned all about the great work that this charity do and we were keen to help children less fortunate than us to benefit from books and libraries in their communities.

Thanks to the superb organisational skills of a group of Year 6 children, a worthy £72.65 was raised for Macmillan Nurses. The bric-a-brac sale was a great success- thank you to all those who supported them.

GH and LL in Year 6 have written the following report about their fundraising event:

In the autumn term, a group of year sixes organised a sale including loom bands, cakes, arts and crafts, name the teddy and hair braiding to raise money to sponsor dogs. Our chosen hounds were the Oakfield Oldies and a Staffie called Caffrey. Fortunately, we managed to raise £152 which allowed us to sponsor the dogs. Soon we will be visiting Caffrey and the Oakfield Oldie gang at Shrewsbury Dogs Trust.​

Unfortunately not the ones with chocolate chips.

Some cookies are necessary in order to make this website function correctly. These are set by default and whilst you can block or delete them by changing your browser settings, some functionality such as being able to log in to the website will not work if you do this. The necessary cookies set on this website are as follows:

Cookies that are not necessary to make the website work, but which enable additional functionality, can also be set. By default these cookies are disabled, but you can choose to enable them below: